In the past I used MTurk because my brother found it to be a decent money maker back when he was in high school in 2008. I was curious after doing the readings for class to revisit Amazon Mechanical Turk and see what’s new on the platform. When I first logged on, I noticed that my hit history was available: 17 hits submitted for a grand total of $12.20. It probably took me at least a couple of hours to make it that far. During our reading, we learned about the harsh realities of MTurk where 52% of users make less than 5 dollars an hour.

The first task HIT that I took was a basic one: transcriptions. Unfortunately sometimes text is unrecognizable even under the lens of optical character recognition, and requires human intervention to take care of the task. Google actually used human labor through its reCAPCHA initiative in the past to make transcriptions for Google books. The task itself was simple: read off a certain hand-written mark and digitize it for the requester. The requester was a firm known as P9R which a lot of people had negative things to say about on the Amazon Mechanical Turk subreddit. 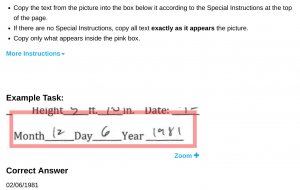 After doing transcriptions on the page, I ended up getting approved shortly and made a whopping four cents. The entire ordeal took about a minute, so I decided to test myself and circuit it a bit. I ended up averaging around 50 seconds per hit which roughly translates to 72 tasks per hour. At that rate I would make 72 times the base rate of $0.04 which leaves me with $2.88 if I repeated the task nonstop for an hour – which is highly unlikely due to fatigue and the potential onset of carpal tunnel… or at least tendinitis.

To take a different route for another task, I decided to take on a bigger task from “VW Griffin” for a whole $0.75. The name alerts me to think that this is an individual looking to receive personal survey results rather than a general data entry task. After taking the survey for a good 15 minutes which went over multiple behavior scenarios in different situations, I was given a code which granted instant pay for the hit. At this rate, I would be making $3.00 an hour which is more than the initial data entry task. 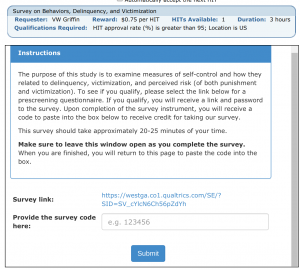 Lastly, I took a medium task to see how it was in terms of income. This task was transcribing recipes that were photos from a personal collection into digital form. What was interesting was that the requester estimated that it would only take 10-15 minutes per hit while it ended up taking 25 minutes for one recipe for me. Also payment would happen anywhere from 2-10 days which is not good if you rely on MTurk for income, because you’re not guaranteed payment either (if the task isn’t perfect). Regardless, this would only earn me less than a dollar an hour. 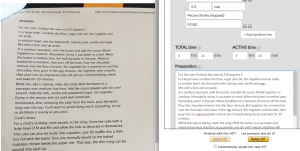 It turns out that Steve Merch, the requester of the task is no stranger to MTurk. He apparently uploads a lot of tasks in the late winter for MTurk users and isn’t lightning fast to pay either. This was probably one of the most important takeaways from this little experiment: finding out how big of a communicating community the MTurk workers are. There isn’t only a subreddit, but mturkforum.com, and more. Oh, and of course you have the psychotic users who are all about the MTurk grind and attempt to make $100 a day – but it’s not really feasible.