Finnegans Wake can now haunt academics in their sleep, and on their twitter feed.

The following bot was created with this guide: http://www.pygaze.org/2016/03/how-to-code-twitter-bot/

The plan for this cloud text experiment was to rewrite a book using a twitter bot. I’ve had a continuing interest in programming a bot and I’m just starting to learn python. I had a spare Raspberry Pi floating around my house that I’ve repurposed before, so I ran a clean boot of Ubuntu, set up the python environment, and started building the remade script. I also made sure to install Team Viewer to make sure that I can take care of any connection issues if they come up remotely.

My thoughts immediately drew me to Finnegans Wake for this project – not only because I have a particular interest in Joyce, but it seems like the most viable candidate due to its very nature. Since the book is loosely based off of Ulysses, what better way to retell the tale than in a Joycean way: every hour in bursts like the episodes. The bot would be programmed to grab text from Finnegans Wake and spit out a tweet every hour of every day. I could then take this reordered text and create a new Wake out of it.

Another interesting end to this project is that it opens up a new feed for Joyce studies. Scholars can take days to study a page, let alone a paragraph of Finnegans Wake. What would happen if a single line was given every hour? Bite sized bits could then be analyzed and responded to at a quicker rate through a medium like Twitter. Ambitious? Yes, but for the sake of this project, it will most likely remain small scale and a testing environment for potentially something in the future.

Once the script was edited and executed, the bot then pulled text at random from the text file (the book) and was set to create a new post every hour. I prefixed each tweet with “#RemakeTheWake” to have a searchable index in the future. The tag was also unused so it was perfect for the bot to stake a claim in the real estate offered. 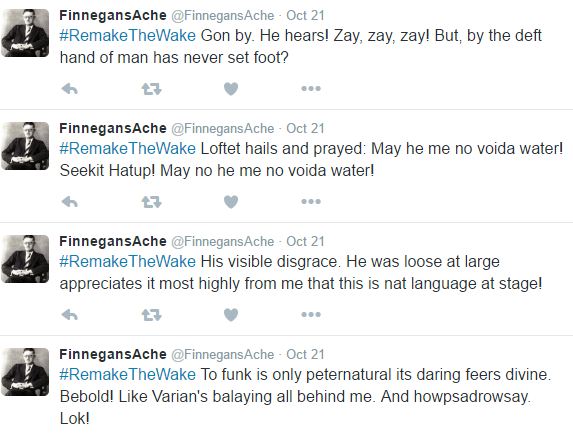 After I let the bot run for a decent amount of time, I pulled the text from the bot, removed the hashtag and created a new “page” of Finnegans Wake using the computer generated text pulled from the original text file. Below you can find a comparison of an original page of Finnegans Wake and the new version of it from the bot. Finnegans Wake is such a unique text, but at the same time so seemingly malleable that it ceases to generate new meaning even when reordered physically on the page. This is why I felt that Finnegans Wake would be the perfect experiment for a bot to randomize and recreate.

Unfortunately the blog isn’t letting me embed the slider for the pages. That can be found HERE

You can find the files for the markovbot and my modifications for the FW version in the my github repository. Oh, and yes I already revoked the access code and regenerated the keys –