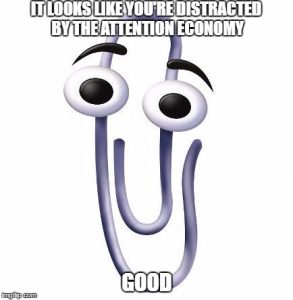 During our last class we unfortunately didn’t have too much time to spend on the Escaping Attention piece by Sy Taffel. I thought it was quite critical, considering it plays with the implications of focusing too much on content and not enough on the materiality of technologies. Taffel looks to take the reader out of the wonder and splendor that the digital 21st century bestows upon us, and straight into the damaged ecological structures that are a direct effect of the attention economy we participate in. As Taffel frames the question: “To what extent can we justify damages to these ecological systems based on the socio-economic benefits that digital culture brings,” which takes the reader aside for a second and tries to help them see past the nanotainments and tidbits that the attention economy has distracted us with (7). What should receive the lens of focus, the wonder of the information flowing to our digital machines, or the blood that made it possible.

Taffel opens with an anecdote to explain the attention economy through video sharing platforms. At first, we’re given an entire account of how a YouTube clip can be broken down into fine grains from the light waves focused onto a sensor, to even the network processes surrounding the upload of an actual video. This is what Taffel refers to as the “physical layer” of the attention economy but the problem is, lectures can go on infinitely about the deployed materials. It is the ecological costs that too often get neglected (1). It’s very powerful to start by using YouTube and Vimeo as examples due to their very nature. This is because those participating in the attention economy are often distracted due to the colossal amount of content that exists, forcing a scarcity of attention. YouTube alone has daily numbers in the hundreds of millions in regards to daily view counts.

Taffel uses the example of the procurement of coltan ore (for the extraction of tantalum) to “bring the stakes of digital materiality into a sharper political and ethical focus” (7). Tantalum is used in the production of capacitors that exist in almost all of your electronic devices. The extraction of coltan ore in the DRC (which accounts unofficially for 10-30% of the global total) has resulted in mineral exploitation between neighboring territories in Africa, most notably Uganda and Rwanda. It’s not only war either – the mining has led to multiple environmental issues as well as situations where wildlife reserves are being depopulated due to miners being unable to find alternative food sources when they’re working.

To sum it all up nicely, Project2049 has provided an interesting chart attached to an article that explains the implications of tantalum extraction on ecology. But what’s interesting about this chart is the fact that it aids to the explanation of the attention economy. As the consumers and admirers of technology, we have the tendency to focus on the surface level, or electronics manufacturers when discussing new technologies. We get so caught up in the hysteria regarding new developments, that we lose sight of the situations happening on the lower levels of the chain. We only view the “End users” subjectively while just speaking on the sub-levels for their objective qualities.

This is then followed by the refining and manufacturing of products. An example of where worker abuse comes about were the controversies surrounding Foxconn. The only reason why it surfaced was because it received media attention, but the problem is the fact that action was inspired only due to negative coverage. Subjects of the attention economy were so concerned about the latest hardware in their IPhones that they neglected to see the negative implications generated by its own generation. The negative coverage then inspired consumer action, therefore it was all kept out of the realm of moral decisions. Apple eventually started taking worker welfare more seriously and as a result hired the Fair Labor Association to survey 35,000 employees about their conditions.

We may never escape the attention economy, but we shouldn’t neglect the ecological consequences that the production of digital technologies perpetuate. Whether it be the conflicts in Africa or the worker abuse in Asia, these topics must be in the minds of consumers while balancing the wonder of the latest devices and breakthroughs simultaneously.